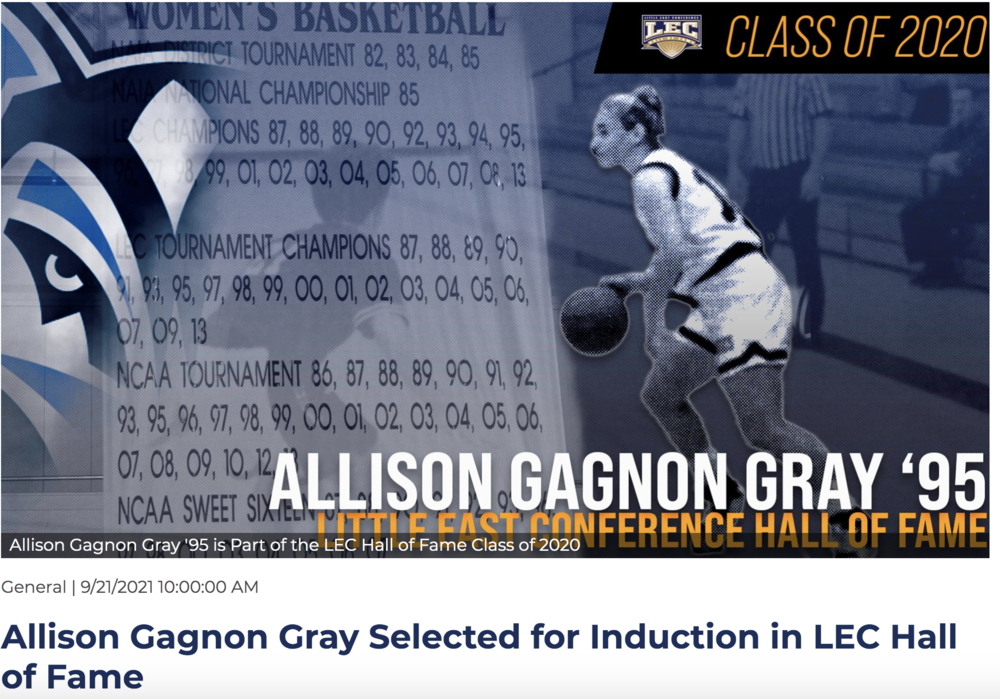 In addition to Gagnon Gray's selection, the LEC announced that former LEC Player of the Year and ABCA Division III All-American outfielder Mike McCullum and the Huskies 1997 national championship baseball team will be enshrined in the Hall of Fame as part of the Class of 2020.  The '97 baseball team is the first team to be inducted into the Hall of Fame as the conference expanded its selection process this year to honor teams for the first time.  The LEC also recently announced its 2021 Hall of Fame Class and it includes former women's basketball standout and three-time All-Little East Conference center Katriina Pulkkinen-Hoass.

Established in 2012, the LEC Hall of Fame now includes 93 individuals and two teams with the inclusion of the Class of 2020 and 2021.  Plans to celebrate the inductions of McCullum, Gagnon Gray, Pulkkinen-Hoaas and the '97 baseball team will be announced at a future date.

Considered one of the finest point guards to ever play for the University of Southern Maine, Gagnon Gray wore a Husky uniform for three seasons from 1990-1993 and led USM to an overall record of 74-15 with three Little East Conference regular-season titles, two LEC tournament championships, and three Division III Elite Eight appearances.

Over the course of her three seasons, Gagnon Gray scored 1,021 points and to this day owns every assist record in program history.  She totaled 660 career assists and set the school's single-season record with 232 during the 1990-91 season.  With her 15 assists in 75-46 victory over Rowan on March 12, 1993, during the Sweet 16 round of the NCAA tournament, Gagnon Gray established a seemingly unbreakable single-game record for Huskies' women's basketball.  Her 221 assists as a senior and her 207 dimes as a sophomore round out the top three single-season total.  She concluded her career as the program record-holder for made free throws (330) and single-season made free throws (116, 1991-1992).

A native of South Berwick, Maine, Gagnon Gray was the first player in LEC history to be named the conference Player of the Year in back-to-back seasons, accomplishing that feat in 1992 and 1993 on her way to a pair of WBCA Honorable Mention All-American citations.  She averaged a career-best 13.2 points and 6.9 assists per game during the 1991-1992 season and averaged 11.0 points and 7.6 assists the following year.

Gagnon Gray earned her bachelor's degree in sociology from the University of Southern Maine in 1995. She was inducted into the Husky Hall of Fame in 2002.